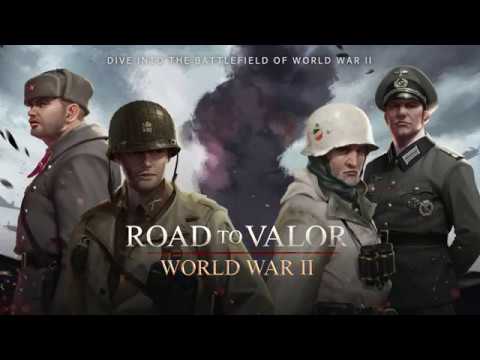 Road to Valor: World War II is a real-time PVP strategy game where you can compete with global players around the world as a General of World War II, the biggest war in history.

Select “Command” that suits your own strategy style and collect various units to build the strongest troops. Fight against swarms of enemies in the realistically presented battlefield. Destroy enemy Headquarter and bunkers to get medals as well as the most glorious victory!

Please note! Road to Valor: World War II is free to download and play, however, some game items can also be purchased in cash. If you do not want to use this feature, please set your purchase password in the Google Play Store app settings. You need an Internet connection to play the game.

[Features]
● Compete with global players in real time. Start a challenge to be a ruler of the world!
● You can select factions from among the Allied and Axis powers!
● Select a specific command strategy, such as Support Ops, Airborne Ops, Fortification Doctrine, Blitzkrieg Doctrine and more. Combine them with powerful Active Skills! The strategy is the key to win!
● Collect different type of history-based units such as Infantry, Vehicles, Tanks, and Buildings. Build the strongest troop and gain the victory. Also, there are some heroes who motivated by real war heroes.
● Get rewards from Crates to collect new powerful units or Upgrade remaining units.
● Destroy the enemy headquarter and bunkers to receive medals and Reward Crates. Don’t forget to open Free Crates given every day!
● Gain Rank Points to enter the higher Battlefield to unlock new and more powerful Units to use. Try until you reach the highest Battlefield!
● You can gain or lose Rank Points by each Battle Victory or Defeat. Dive into a global competition with players around the world to become the greatest General in the world!
● Create a community, “Corps”. Share units with Corps members from the same Faction and have a debate on winning strategies to enjoy the game even more!