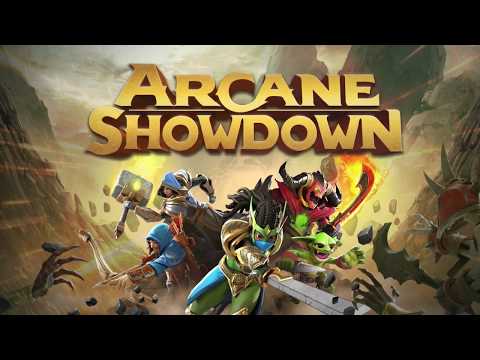 DomiNations | อังกฤษ DomiNations 4.5
Arcane Showdown takes you to an epic battle of magical might!

Use real time strategy to deploy and command a powerful army across a large battle arena. Level up your troops, build your deck and defend your base on the battlefield as you summon creatures and unleash spells to conquer your foes. War strategy will determine if you can outwit, outmaneuver, and overpower your opponent with your skills.

Fantasy game creatures and powerful spells are ready to be unlocked. Level up their powers and create the ultimate battle deck to wreak havoc on the battlefield. Power up your deck with new spells and monsters to wreak havoc on your foes as you put your strategy and resource management to the test in real time.

Fight epic battles in the battle arena alongside or against your friends and guildmates.

Download Arcane Showdown and prove your right to ascend to the top of the Citadel!

Real-Time Strategy Game
- Turn based games with epic strategy: enchant mana veins for faster resources, statues for increased health and defenses, and beacons to claim more territory.
- Use war game strategy, be vigilant and adapt to your enemy’s attacks.
- Epic battles await - get ready to unleash terrifying powers onto the battlefield!

Fantasy Battle Simulator
- Epic games with creatures, base building, magic and strategy.
- Build your deck and battle with magical powers and creatures.
- Battlefields with fog of war and sneak attacks.

Power Up and Collect Troops
- Level up your troops - Behemoths, Firedrakes, Heckhounds, Spider Queens, and more are yours to command.
- Collect and upgrade a variety of creatures and spells to create your strategy deck of destruction!

Battle Arena
- War game with your guild in campaigns of magical conquest.
- Battle games with PvP matches.
- Battle alongside friends in 2v2 battles.

The Citadel awaits in Arcane Showdown!