You are an acrobat performing in a land torn apart by war.

During a performance in your hometown, an unexpected guest creates a stir. That same night you are unexpectedly attacked by soldiers of the Empire…

You are saved by a trio of thieves, one of whom you recognize from the audience of your earlier performance.

When they invite you to become a member of the team you adamantly refuse, until they promise you something that is hard to turn down… Clues to your forgotten past.

What do the thieves want?
How will your relationship develop with the three men?
Rediscover your past and find true love in a world of steampunk adventure!


✢✢Characters✢✢
♠ Augustus — The Charismatic Leader
The enigmatic owner of ‘Harrington’s Flying Co.’ Augustus is a well-known and respected figure.

But behind the public image lies the truth — he is the leader of a notorious band of thieves. Equal parts suave magnate and mysterious bandit, can you uncover the real Augustus...

♠ Griffin — The Reserved Engineer
Griffin is the man behind the scenes.

Everyone relies on his judgement to ensure the success of the mission, no matter how difficult things become. More comfortable with machines than people, you will need patience to break through his aloof demeanour...

♠ Sidney — The Energetic Bodyguard
Never far from Augustus, the athletic and energetic Sidney brings boundless enthusiasm to the group. His impulsive and light-hearted attitude propel the bandits forward, but is there darker side to this fun-loving bandit... 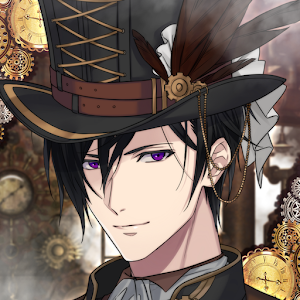