In Between Love & Death:Romance you choose In Between Love & Death:Romance you choose 0.0
■■Synopsis■■
You are a young woman who works at a pharmacy passed down by your father. As you head back home on the afternoon of the yearly town festival, day suddenly turns to night and a raging storm begins. You rush to close up shop when you hear a loud noise. Coming towards you is a man covered in blood.
You hurry over to the wounded man and attempt to help him, but his wounds are deep. You can do nothing but pray for his life… until you notice that his wounds are beginning to heal by themselves?!
Before you can realize what’s going on, a mysterious man appears in front of you. He says “It seems you have your father’s powers.” as he approaches you, but the moment he tries to touch you, the wounded young man jumps at him and the two disappear into a bolt of lightning.

The next day, you wake up on the floor. The world around you is peaceful and the events of the day before seem like a dream. As you attempt to convince yourself that the man was just the effects of a bad night’s sleep, you notice an envelope on your table that reads, “Acceptance Letter to Miss Cromwell’s College for Magical Studies”.
Although nervous, you decide to enroll in the magic academy. Awaiting you are three handsome men, each with their own unique skillsets and personalities. Learning magic at the academy, every day is a new experience for you, but you can sense that there might be something sinister going on behind closed doors…

What kind of magical abilities do you possess? Who is the mystery man who showed up at your shop?
Who will be the one to cast a magic spell on your heart?

■■Characters■■
・Kafka
A mysterious young man who appears at your shop covered in wounds. He does not talk much with others and tends to do everything by himself. Although he makes himself hard to approach, he is kind at heart and makes sure that you stay out of danger. He is skilled, as well as knowledgable in magic.

・Jules
Jules is a naturally skilled magician who is able to use high-level magic as well as black magic, which is labeled as taboo. He often makes fun of you as you struggle to pick up magic concepts. The people in town have labeled him as a problem child and avoid him, but he seems to have gotten used to being hated by others.

・Cien
Your upperclassman, Cien is kind to everyone and is seemingly the perfect man. He is an honor student and the pride of the school, as well as being popular with girls. He always acts cheerful towards you but secretly feels pressured because of the expectations of those around him. 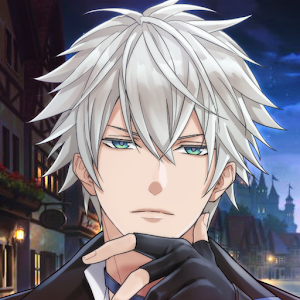