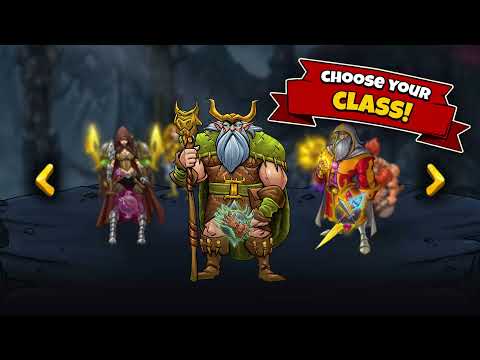 롤플레잉 판타지
1.8
Shakes & Fidget is a fantasy RPG developed by Playa Games. The game is originally an online RPG, and this is the mobile version. In this game, players can embark on an epic adventure with numerous game features like quests, PvP guild wars, and arena mode.
Shakes & Fidget is one of the award-winning cartoon role-playing games set in medieval times, and it has more than 50 million users! That makes it one of the top games in English-speaking countries. Sounds crazy? It is!
It started as a browser game, and now you can play Shakes & Fidget RPG on the go for free! There are new updates regularly. Join the free MMORPG world with millions of players around the world to rule the medieval world with your unique hero. Download and play the fun, satirical, free-to-play role-playing game full of adventure, magic, dungeons, legendary monsters and epic quests today! One of the top games in English-speaking countries!

In this fun fantasy role-playing game you can create and customize your own medieval comic character, meet different characters on your journey, experience crazy adventures, complete quests and earn rewards to reach the first place in the Hall of Fame! Each animated character has a unique and fun style with vivid stats. Choose your RPG hero strategically to become a legend.

This is no easy task as real online players stand between you and your victory in the PVP Arena.

Meet different heroes in the game that will give you quests, fulfill guard duties or just play mini games to pass the time while on quests to earn rewards and upgrade your hero for powerful quests and adventures!

Ready your weapons and prepare your medieval comic hero to fight legendary monsters on powerful quests. In the tavern, you meet many special characters looking for heroes to embark on quests for rewards! Make sure your hero is ready to fight mythical beasts and legendary monsters by customizing your hero and equipping him or her with the best weapons and armors. The character's stats also play an important role in the quests! Be brave and march on!

A fortress allows you to mine powerful gems and train soldiers, archers and mages. Make sure to strategically build different aspects of your fortress to reap the best rewards and have solid defenses to protect your fortress from enemy attacks.

Together with your guild mates, you become stronger, more invincible and find tons of epic loot! Go on quests, experience exciting adventures, level up, collect gold, gain honor, be "overpowered" and become a living medieval legend!

Fight in multiplayer PVP in Guild Wars and Arena with your RPG Hero.

Battle other players in guild wars if you are part of a guild, or in the arena if you are playing solo. As there are many talented online players with their fierce tribes waiting to defeat you, be on your guard on the journey of young hero!