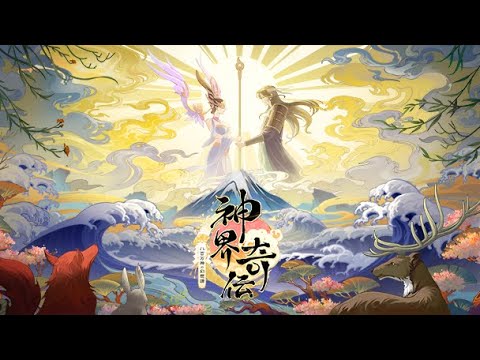 ◈ Game overview ◈
Now, to the endless mythical world.
This work is a full-scale RPG that spells out myths and bonds based on ancient Japanese myths.
Enjoy ancient Japanese mythological stories with a new interpretation!
The gods that every Japanese knows (Amaterasu, Susanoo, Hinokagutsuchi, Yomitsu Okami) are also appearing in the game one after another!
◈ Synopsis ◈
Since ancient times, there have been two countries, "Takamagahara" above Saiun and "Ashihara no Nakatsu" under the sky. With the blessings of Amaterasu Omikami, the gods who govern Takamagahara put everything in the world and did their paradise. However, due to the rebellion of Susanoo, the younger brother of Amaterasu Omikami, the gods were divided into two systems, and a war straddling "Tenjin God" and "Kunizu God" began, and the order of the heavens and the earth was overturned.
The captain (you) who leads "Kunizu God" encounters an unexpected betrayal when he attacks Takamagahara's 巔 Ryutan.
Once you lost your life and fell to Takamagahara, you have taken many journeys and the memories of your lost previous life will be revealed again ...

◈ Game features ◈
◆ Start your adventure journey in the beautiful old mythical world!
Write an epic adventure myth!
As the story progresses, the colorful Takamagahara spreads out in front of you!

◆ Transform into a longed-for god with the unique "God-dwelling" function!
Amaterasu Okami, Susanoo, Okamuzumi, Ryomen Sukune, Hino Kagu-tsuchi, Kaguyahime, Yomitsu Okami ...
Many gods named in the myth can be selected and operated!
Become a god with the "Kamijuku" system and experience the power of God!

◆ Easy operation, manual / auto free switching, even if left unattended, it goes smoothly!
Manual mode & auto mode can be switched! Let's engrave a powerful action scene with easy operation!
Whether you're working or studying, the story goes on and you don't have to worry about it!

◆ Switch your camp as you like!
By reaching a certain level, the camp switching system will open!
Is it Tianjin God or Kunizu God? You decide your own destiny!

◆ Get 100 consecutive gachas for free just by logging in!
Many in-game events are available!
Get limited items and gorgeous gifts one after another!

◆ God beast, architecture, appearance ... Lots of casual elements!
The best companion in battle and everyday! Let's raise a super cute god beast!
As you level up, you can get a lot of free appearances, and you can change the appearance system freely!
Build your own home with the shrine system and invite your friends to hang out!
Exchange Sakazuki and make an eternal pact with your loved one!
Various game elements are here now!

◆ App price
App body: Free to play * Some paid items are available Please be sure to check the terms of use before using.

* Even if the device meets the recommended environment, the operation may become unstable. To enjoy the game, you need to be connected to the network.