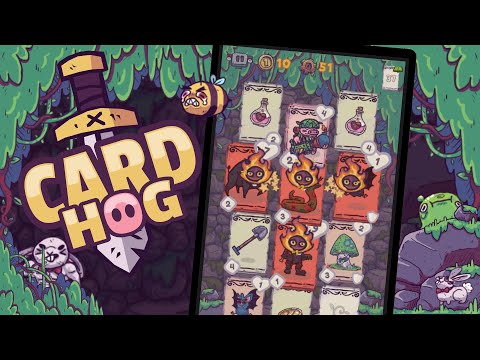 Crawl around card dungeons with your brave hog hero, collecting loot and fighting dangerous enemies. Use strategy and exciting card combinations to progress as far as possible in the endless dungeons, build unique card decks to suit your playstyle and improve your chances of survival with permanent upgrades.

Game is currently in Early Access and is being actively developed!

Easy Controls
By default both swipe and touch controls are enabled, but you can switch off swipe for more responsiveness. Some special magic cards like Snipe or Lasso will require you to select either direction or specific card to attack or interact with.

Gameplay
Explore Card Hog dungeons by defeating various enemies and collecting valuable loot. Master the weapon cards, their combos to slay bosses or elites that stand in your path. Unlock achievements and upgrade your pig hero. Die and repeat the run again in a true roguelite passion!

Every run is unique and every hog needs a different strategy to master. Learn to use enemies against each other and you'll adventure further!

Card Hog is a tile-based card crawler with sliding puzzle, RPG, roguelite and deckbuilding elements. Made by SnoutUp, solo developer and creator of pig-based mobile games like Iron Snout, Bacon May Die and Cave Blast.