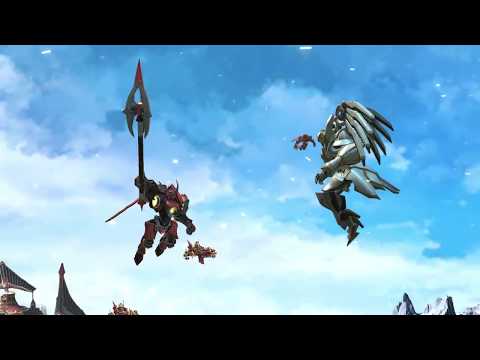 The War of Genesis: Battle of Antaria | Korean

GrandChase | 韓国語版 그랜드체이스 4.6
The War of Genesis: Battle of Antaria is a strategy MMORPG for mobile.
Go on an adventure in your own airship with memorable characters and giant Machina!
Combat fearsome monsters and the armies of Dark Armor to reclaim the continent of Antaria!
Experience captivating stories and become a true hero!

- The War of Genesis features a large cast of heroes with unique abilities and strengths.
- Control ancient Machina: Devastating machines of war that can turn the tide of battle!

- Build your ideal party with different Airships/Machina/Heroes!
- Customize your characters with different items and skills that suit your own playstyle!
- Research technologies to unlock new Airship capabilities and become the best captain!

- Don't fight alone: Strengthen your forces by joining a guild!
- Assemble your fleet and warp into intense skirmishes!
- Upgrade your guild base and defend your territory from other guilds.

- Joining a guild makes you a shareholder! Invest and help your guild grow.
- Collect resources to help your guild dominate!
- Obtain valuable items with the trade system and always be war-ready!

- Create your own epic quests, side stories, and secret histories with custom story mode!
- Share your creations with your friends and fellow players around the world.