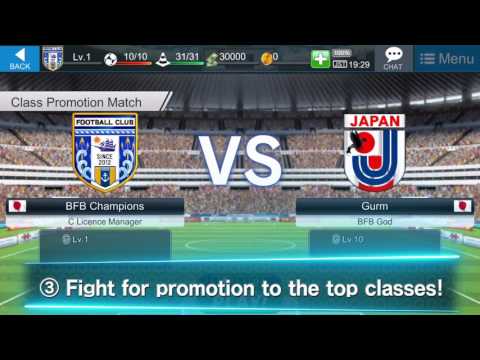 イケメン王子 美女と野獣の最後の恋 乙女・恋愛ゲーム イケメン王子 美女と野獣の最後の恋 乙女・恋愛ゲーム 4.7
COLLECT AND TRAIN YOUR PLAYERS
Use Scout Tickets to find new players for your squad – if you’re lucky you’ll find a superstar to build your team around! Choose from a multitude of minigames to train your squad and hone their skills. Then choose which attributes to increase to mould them in your managerial image.
PICK YOUR SQUAD, CHOOSE A FORMATION, AND PLAY IN LEAGUES ALL OVER THE WORLD
Pick your players, choose a formation that fits their skills, and refine your tactics in a singleplayer Career Mode that features 300 leagues from all over the world. Fully 3D match scenes capture all the excitement of matchday.
TAKE ON OTHER MANAGERS IN MULTIPLAYER TO BECOME WORLD NO. 1!
When you have mastered the managerial challenges in Career Mode, move on to our multiplayer tournaments. Represent your hometown club against other BFB Champions players during the national stages before representing your country against other clubs from the same continent, and then finally take on players from all over the globe to become World No.1!
DIEGO MARADONA
And introducing... Diego Armando Maradona! Are you going to play with him, or against him? Avail of his footballing genius or avenge 30 years of hurt? In BFB Champions you call the shots.
(Other licensed players and teams will be added after launch, so stay tuned!)