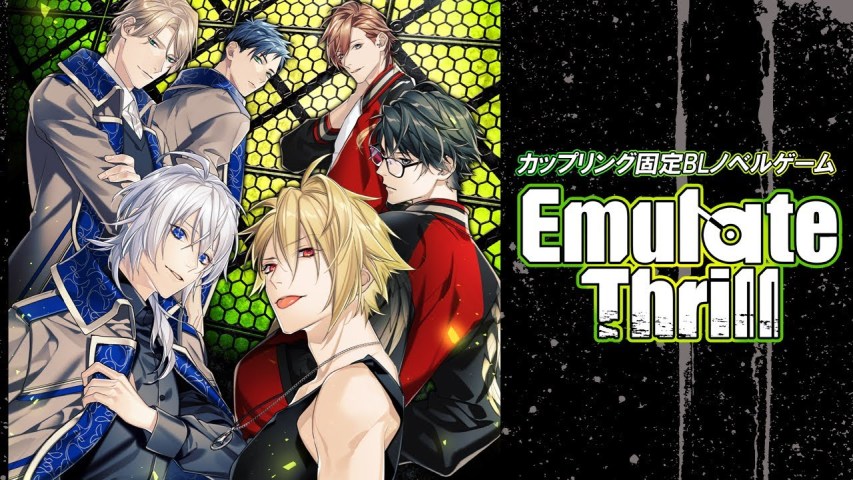 Emulate Thrill is a BL love simulation game developed by otomedou. The game will be a free dating ADV with in-game item purchase.
◆◆Game Introduction◆◆
Will you reach for money, glory, or…?
Emulate Thrill is a BL game with fixed pairings - meaning you stick with your partner. You consume tickets to continue progressing in the story.
Setting:
A town of four districts...
This city is militaristic, with teams dividing up the four quarters: north, south, east, and west.
Hikage of the Vermilion Birds rounds up delinquents.
Tamao of the intelligence group, known as the Azure Dragons, specializes in information warfare.
As the entire city is engulfed in a dire crisis, you'll discover everyone has different hopes, dreams, and motives.
Will you reach for money, glory, or...?
◆◆Characters◆◆
Hikage - the charismatic head of the Vermilion Birds
He’s friendly, if a bit foul-mouthed. Hikage won’t be caught unprepared or act carelessly.
He prides himself on strategy and isn’t afraid to play dirty if he thinks it’s necessary.
Suo - the only intelligence officer in the Vermilion Birds
He absolutely despises Hikage. He’s a bit hot and cold, regularly bad-mouthing others and getting into fights...and so he’s known for causing trouble.
Niwa - Hikage’s adoring watchdog
He’s a member of the Vermilion Birds. He doesn't speak much about himself, and so he’s a bit of a mystery.
Just as intriguing, his one and only interest is Hikage...
Tamao - the Queen of the Azure Dragons
He fully understands the meaning of lead-by-example. This queen rules with an iron fist.
Haruomi - a mediator
Tamao’s childhood friend and an employee at the mediator agency, the Kirin.
He’s well-informed and capable, making him coveted by many other teams.
Munechika - a wicked gentleman serving the queen
This gentleman wears many hats, with his duties to Tamao ranging from acting as her secretary to a staff officer.
Shirogane - the lovely proprietor of the mediator agency.
He’s the guild manager... and Haruomi’s boss.
Genbu - a soldier with a few vices
He’s in charge of issuing jobs at the introduction agency.
He’s hard to read, with a bit of a showy, flippant personality.
◆◆Game Playstyle◆◆
Emulate Thrill is a BL visual novel that requires you consume scenario tickets to progress through the storyline.
The game is free-to-play and you receive 5 free tickets per day.
Through the in-game choices, you can change how close you are with a love interest.
Because potential pairings, tops, and bottoms are all fixed, you can mix the couples as you like.
As the characters like each other more, you can unlock special scenarios and more.
You can also enjoy special storylines!