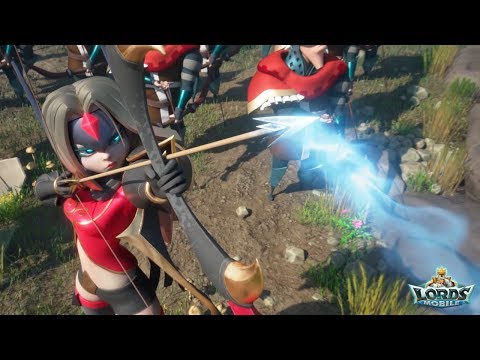 Strategy RPG
3.7
Welcome to the Dungeon Welcome to the Dungeon 3.9 Three Kingdom Infinity 三国INFINITY(三国インフィニティ)【無料で遊べる】 3.2 마피아42 Mafia42 3.8 Wonder Tactics ワンダータクティクス 3.5
Castle Clash: Age of Legends Castle Clash：頂上決戦 4.0 Lost Stones: Aya's Prophecy Lost Stones: Aya's Prophecy - Puzzle RPG 3.4 Castle Clash: New Dawn Castle Clash: New Dawn 3.5
Want to clash with 130 million global players? Dive into LORDS MOBILE, the real-time strategy mobile MMO game chosen as one of Google Play's Most Competitive Games, and an Android Excellence Game of 2017!
Explore exotic magical lands thrown into chaos by terrifying monsters and powerful enemies. Choose your favorite heroes, make new friends, and charge fearlessly into war! Strike down your foes and build an empire!
FEATURES
☆ An Open-World Mobile Game ☆
Join with millions of players in an open world, on mobile! See, chat, and clash with other players in this MMO game!
☆ Finding Friends ☆
Unite your allies in your kingdom and ride into war together!
☆ Rule as the Emperor ☆
Claim the throne in a battle royale for the kingdom! Will your legacy as a ruler be just or cruel?!
☆ Powerful Heroes ☆
Recruit and upgrade heroes with unique skills and character! Let them lead your kingdom to glory, or mix and match them to complete an RPG-style campaign that you will want to play again and again!
☆ Master Your Strategy ☆
How will you prepare your troops for the clash? Think of new lineups and perfect your strategy! Find the best way to strike down your opponent in this top-notch mobile MMO SLG!
☆ Animated Battles ☆
Experience the thrill of war as armies clash in beautiful 3D graphics!
☆ Switching Kingdoms ☆
Establish your empire on new lands by moving to any server you want with a simple tap! Get mobile!
☆ Choose Your Path ☆
Will you conquer enemy kingdoms and imprison rival lords? Will you liberate prisoners of war? Or will your kingdom and empire crumble to dust?
☆ Summon Familiars ☆
Forge pacts with fearsome monsters and make them Familiars! Train and groom your new companions to their full potential. With their powers by your side, nothing can stand in your way!
Write your own legacy, only in LORDS MOBILE!
Official Facebook Page: https://www.facebook.com/LordsMobile
Note: This game requires an internet connection to play.
[App Permission]
Devices running Lollipop (OS 5.1.1) or below can enable the following to save game data on external storage.
- WRITE_EXTERNAL_STORAGE