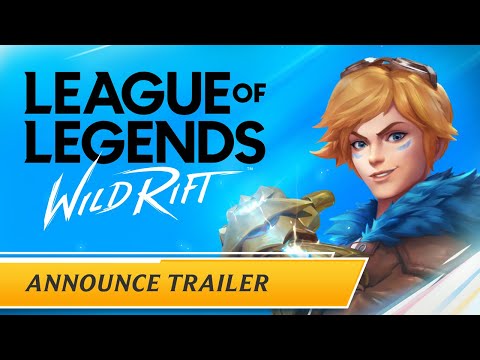 League of Legends: Wild Rift (LoL Wild Rift) is a mobile adaptation of Riot Games' phenomenal MOBA of the same title. Bookmark it now and download the apk once it's released!
League of Legends: Wild Rift brings the fast-paced PVP action-strategy of the LoL PC game to mobile and console!
Welcome to the Wild Rift! Featuring the same skill-based 5v5 PVP gameplay you expect from League of Legends on PC, Wild Rift was built from the ground up for new platforms. Lock your choice from a huge cast of League champions, team up with friends, and outplay the opposition.
THE LEAGUE YOU KNOW
Experience the thrills of League’s competitive and strategic 5v5 gameplay, rebuilt specifically for mobile and console. Choose your champion, take to the Rift, and destroy the enemy Nexus in 15-20 minute matches.
A NEW RIFT
Explore the Wild Rift, a new-yet-familiar 5v5 map based on Summoner’s Rift and streamlined for faster games. A responsive dual-stick control scheme, designed exclusively for new platforms, makes sure your skillshots on mobile feel as crisp as they do on PC.
NO IMPOSTORS
Wild Rift will include a familiar cast of over 40 champions at launch, with more favorites on the way. Light the way with Lux, spin to win with Garen, or blow it all up with Jinx.
COMPETE AND CLIMB
Master the new Rift, climb the Ranked ladder—and earn unique loot along the way. Like LoL PC, Wild Rift lets you prove yourself with high-skill champs, macro strategy, and myriad playstyles.
DRESS TO IMPRESS
Customize your champ’s look to your liking with loads of skins across dozens of themes. Then, get closer than ever before with Wild Rift’s all-new 3D model viewer.
SKILLS NOT BILLS
All champs can be earned for free, and there’s no paying for playtime or power. Ever.
Support: lolwr-mobile-support@riotgames.com
Privacy Policy: http://leagueoflegends.com/legal/privacy
Terms of Service: https://na.leagueoflegends.com/en/legal/termsofuse
Download League of Legends for PC & Mac: LINK

League of Legends: Wild Rift 英雄聯盟：激鬥峽谷 will be installed on your device. Riot Games, Inc Download APK
Pre-Register via QooApp