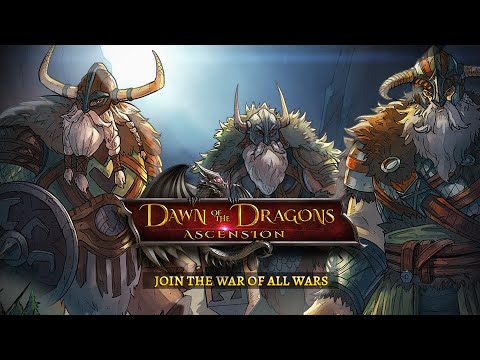 Tintin Match Tintin Match 3.8
The Great Dragon War has returned to the land of Tor'gyyl. It has fallen upon you to stand up to the fearsome War Dragons and embark on an adventurous journey to change the course of history! Dawn of the Dragons: Ascension takes the classic tactical turn based RPG genre to the next level. The game features player-based Guilds, a rich narrative and a wide range of quests, activities & locations to explore. Do you have what it takes to fight back the army of invaders?!

In Dawn of the Dragons: Ascension, you call the shots. The world is filled with quests for you to complete and level up on your own or by joining up with fellow Adventurers. Take part in a bountiful list of live, ever-growing games activities - including Guild Missions, Raids & PvP battles!

Defeat the Draconic Overlords and their fierce War Dragons in tactical turn based RPG combat by utilizing the best strategic attacks, acquiring powerful Allies, and upgrading your arsenal of weaponry, spells & abilities. Be prepared to battle vile creatures throughout a wide range of environments, including desolate dungeons and enchanted forests!

The Great War Dragons have ravaged the country. Decide your own path through the land of Tor’gyyl and explore & quest as you see fit. Reap the rewards of progressing by unlocking new loot, skill points & treasure as you fight your way through the invading armies!

THE GREAT DRAGON ARMIES ARE HERE

Delve into the war torn world of Tor’gyyl caused by the Great Dragon War and explore a rich medieval universe with over nine years of lovingly crafted characters and narratives from the original turn based RPG - Dawn of the Dragons. Forge alliances and build your strength as you take the fight to the destructive invading forces and their draconic masters!

ASSEMBLE YOUR OWN GUILD

In Dawn of the Dragons: Ascension you can create your very own Guild or join up with other players and take part in an endless number of tactical Missions, Raids & various activities for exclusive rewards & loot. Team up with your friends or meet new like-minded Adventurers through your travels!

Progress through the game and unlock the ability to summon fierce & helpful Allies, who will assist you in tactical turn based RPG combat on your quest to triumph!

Dawn of the Dragons: Ascension consists of an active & devoted community. Take part in friendly world chats, visit our forums, or simply band together in tactical battles in a constantly updated list of community events and Raids!

Dawn of the Dragons: Ascension - Turn based RPG 龍之黎明：崛起 will be installed on your device. 5th Planet Games Development ApS
Download via QooApp