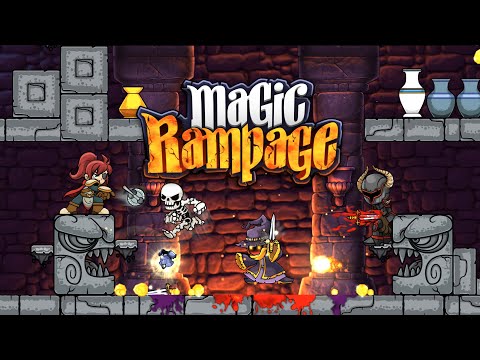 Action Pixel RPG
4.6
Magic Rampage is a RPG game developed by Asantee.
Exciting platformer that combines the RPG genre with fast-paced action gameplay. Magic Rampage features character customization and dozens of weapons to wield; from knives to magical staves. Each dungeon introduces the player to new obstacles, enemies and secret areas to explore. Search Bonus levels, strive in Survival mode, join forces with friendly NPCs and battle it out in challenging Boss fights.
Magic Rampage features an exciting online Competitive Mode where players around the globe compete to see who's the best in randomly generated dungeons; featuring unique bosses, exclusive new items and content!
Magic Rampage brings back the look and feel of the very best classic platformers from the 90's, introducing refreshed and engaging gameplay mechanics. If you miss platformers from the 16-bit era, and think games nowadays aren't that good anymore, think twice! Magic Rampage is for you.
Magic Rampage supports joysticks, gamepads and physical keyboard for even more accurate gameplay responsiveness.
CAMPAIGN
Venture into castles, swamps and forests to fight zombies, giant spiders, dragons, bats, and many tough bosses! Choose your class, dress your armor and grab your best weapon: knives, hammers, magical staffs, and much more! Find out who captured the king!
COMPETITIVE
Challenge other players in randomly generated dungeons with huge variety of obstacles, enemies and bosses! You can also challenge your friends. The more you compete, the better your rankings will be and you'll be featured in the great Hall of Fame!
WEEKLY DUNGEONS - Live ops!
A new Dungeon every week! Each week, players will be presented with unique challenges and epic rewards!
Weekly Dungeons offer time and star challenges in three levels of difficulty. Additionally, you get extra Rank points every day you complete it.
CHARACTER CUSTOMIZATION
Choose your class (Mage, Warrior, Druid, Warlock, Rogue, Paladin, Thief and many more) and customize your character's weapons and armor. You can choose the perfect weapons and armor according to your class, as well as their magical elements: fire, water, air, earth, light and darkness, further stylizing your hero with your playing style.
SURVIVOR MODE
Test your strength! Enter the most dangerous dungeons of the castle and fight against various enemies. The longer you can stay alive, the more gold and weapons you will win! Survival Mode is a great way for you to gain new weapons, armor and lots of gold to equip your character and get stronger and stronger.
THE SHOP
Meet the salesman and browse his shop. He will offer you the best weapons, armor and also rare runes, with which you can increase the damage of your shield in your weaponry. The Seller is not too friendly, but he is the only one that can help you against all the enemies and bosses you will find in this battle!
LOCAL VERSUS MODE
Do you have an Android TV? Plug in two gamepads and invite your friends to play with you! We've created a versus mode featuring the main characters in the game, with battle arenas based on the Campaign mode's Dungeons. You will have to be quick to win! Pick up weapons that are in the crates across the arena, kill NPCs and keep an eye on your opponent! Magic Rampage 魔法狂暴 will be installed on your device. Asantee
Download via QooApp