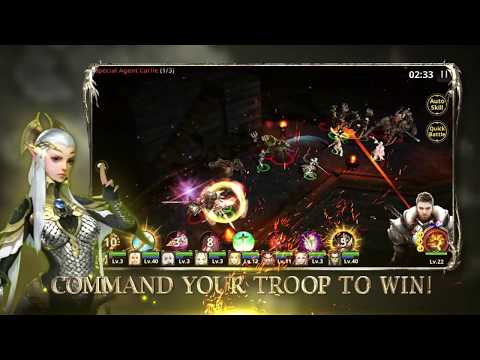 Real-time RPG
3.7
AWAKERS tells an exciting story that leads to halting the invasion of dark forces led by Hellshade.
Battle to obtain the Soul Stone that awakens strong power.
Conspire, betray, and ally with enemies.
This and more awaits you in AWAKERS: The Arcane Force.

▣▣ Story
Warriors discovered the power of the secret universe in the constant cycle of war between the Light and Darkness.
These warriors stood on the side of the Light and led the war to victory, leaving the earth and moving on to eternity.
Those who possess that ability feared even by the gods are known as “AWAKERS”.

▣▣ Game Features and Description
▶ Open massive battles with 9 heroes who want to save the world
Riveting battle with 9 heroes that is hard to find anywhere else.
Not only is there the story of the 9 heroes, but also enjoyable content from a variety of squad members.
Assemble Defenders, Assault, Ranged, Mages, and Healers to form your own strategic Battle Deck.
Enjoy a variety of battle styles that stem from the strategic choices of skills for each of the 9 heroes.

▣ High-quality RPG with realistic graphics
A perfect background for a story with a wide cast of realistic characters such as humans, orcs, elves, beasts, golems, fairies to help maximize the game immersion.

▣▣ Content
▶ Forces
Battle with your varied squad, selected from more than 400 troops from the powers of Light, Darkness, and another mysterious power.
Choose from 5 classes to form your strategic force. Defenders to shield your troops, Assault units with strong and rapid attacks, Ranged units for piercing enemies, Mages to burn enemies, and Healers to restore health and mana.
Varieties of distinctive skills for each class are gorgeously displayed to ramp up the excitement of battle!
Build your own strategy with your skill combinations. Attacking is so much fun with the variety of content and strategies.
It is exciting and fun to improve your forces through leveling, evolving, upgrading, skill improvement, transcendence, and descending.

▶ Guilds
Everyone can create their own guild, without restriction!
You can battle regionally through the country selection. Select global to enjoy battle with users from all around the world.
Working together with your fellow guild members will help you build the best guild ever. Enjoy a variety of guild content together!
To protect your honor, take part in the best strategic battle by competing together with your guild members in the weekly Guild Wars.
As your guild grows stronger, you will receive many benefits including hero item purchases and battle buffs.

▶ Challenge mode
1v1 - Experience a new challenge in order to become a Champion of the Arena. This challenge is only for those who are the strongest!
The 50th floor is the best place to test the strength of your troops. Improve your forces to move higher.

▶ Descent
A strong guardian AWAKER will attack with their powerful skill strength for a time when they turn into their Descent Form.
If they transform into this Descent Form during battle, you can count on beating your enemy!

▶ World Map and Theme Dungeons
The World Map has three kingdoms: the Arre Empire, the Eastern Great Plains, and the Ancient Empire.

▶ Scouting
You can play every day in the Daily Scouting Dungeon.