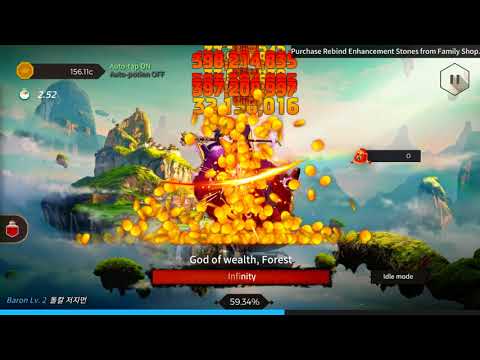 Life is a Game Life is a Game 4.3
Solution when touch is not available
1. "Galaxy Launcher's recent apps and back button lock" <= Disable
2. Blue Light Filter <= OFF

The new paradigm of Clicker RPGs which never existed before, Noble!
Your character becomes stronger even while your phone is turned off!

The new paradigm of RPGs, developed by Daft Brothers and published by DAERISOFT!

■Beautiful illustrations that would melt your heart!

Sick and tired of games with mediocre graphics!

■Relentlessly TAP on monsters that appear in the game!

You could hold instead of tapping to attack!

■Become part of a Family with other users!

Compete with other Families!

■Just keep it on even when you are busy!

The best type of Idle survival RPG for busy people!

Your precious reviews gives strength to the developers!^^

Noble! The game created together with the users.
Save Arendel from chaos and become the best mage ever!

Arendel, a kingdom ruled by 13 Gods. When Arendel was
born, the Gods knew that if mages with godly magical
powers came into power, the authority of humans with
no powers would plummet to the ground. Hence they
banned mages from becoming nobles.

However, the very magically talented protagonist with no
affiliations whatsoever with the ban, was not even a bit interested
in gaining authority and power.

Accompanying this protagonist, an elemental that is slightly
materialistic and wishes to be a noble.

The once peaceful Arendel now walks the path of
destruction as the Gods turned their backs on the distrusting
humans.

Thanks to the sacrifice of the archmage, who was the
guardian of the kingdom and the father of the protagonist, the crisis was
evaded during the battle with the Gods. Pushed into a corner, the old king of
Arendel and Steepes, the only God of that trusted the humans make a very big decision.

They have decided to allow mages to become nobles. Their titles were to be
decided by their ability to defeat enemies, and whoever defeats the God of
darkness, Opere and the God of Light, Steela would be given the title
Archmage of the kingdom and be given the throne as well.

The elemental wanted all of the power and wouldn't have missed this chance.
But on the other hand, it was scared. So it persuades the protagonist
and finally, the adventure begins.

Will the protagonis be able to save Arendel from destruction?

DAERISOFT,Daft Brothers promise to try our best to communicate with the users.