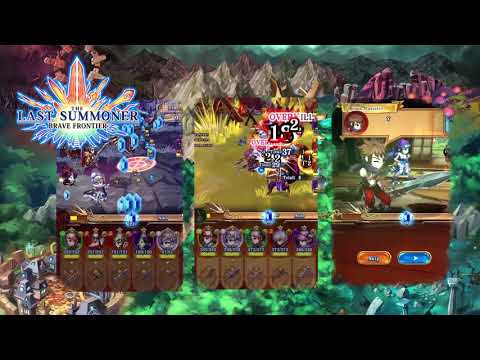 CRYSTAL OF RE:UNION CRYSTAL OF RE:UNION 3.6
BRAVE FRONTIER: THE LAST SUMMONER
Embark on a fantastic adventure in the Brave Frontier universe - icon game played by millions - build an army, fight tyranny and reveal the mystery behind a new world of fantasy in this epic turn-based JRPG!
Brave Frontier: The Last Summoner lets your wildest JRPG dreams come true as you get full control over up to 25 characters in a single battle, whether you're advancing the story or competing in real-time PVP matches! Feel the freedom of a completely customizable experience as you obtain fantastic weapons, unlock exceptional skills and obliterate enemies with style thanks to an impressive cast of stylish characters! Jump into a brave new world and become the legendary general you were always meant to be!
STATE-OF-THE-ART HD 2D JRPG
Immerse yourself in the rich and vibrant fantasy world of Vask and meet charming characters brimming in style, handcrafted and animated with love to offer you the most thrilling battles ever seen in a mobile RPG!
BUILD AND LEAD AN ARMY
Engage in turn-based battles of epic proportions where up to 50 characters fight each other as you launch synchronized attacks, unleash special Brave skills and summon mighty Spirits to destroy your opponents, no matter their size!
COLLECT HUNDREDS OF CHARACTERS
Assemble a huge cast of charismatic heroes and villains ready to take arms for you as you train, specialize and evolve them to unleash their true potential, completing a vast collection of 7 different species – Humans, Giants, Undines & more!
MILLIONS OF WAYS TO PLAY
Become a master of strategy as you experiment with 9 Weapon Types, from hard-hitting to buff-empowering, enhanced by upgradable specialty skills to obliterate anything in your path – the possibilities really are endless!
PLOT TWISTS AT EVERY CORNER
Put together the puzzle pieces of the last summoner's untold story as you witness history defining events from different points of view, all interwoven into a story of loss, courage and honor! Will you find the truth behind the bifrosts, Summoner?
Embark on your most extraordinary adventure featuring intense battles, high-end graphics, complex customization and content-rich stories! Made for JRPG fans, by JRPG super fans!
_________________________________________
Come say hi on social media:
Facebook: https://www.fb.me/BraveFrontierTheLastSummoner/
Twitter: https://twitter.com/BFTLS
Youtube: https://www.youtube.com/channel/UCM3yOUaP3z7ts5MBFGxM-5w
This app is free to download and play. Some virtual items can be purchased for real money.

Brave Frontier: The Last Summoner 勇者前線：最後的召喚師 will be installed on your device. gumi Inc. Download APK
Download via QooApp