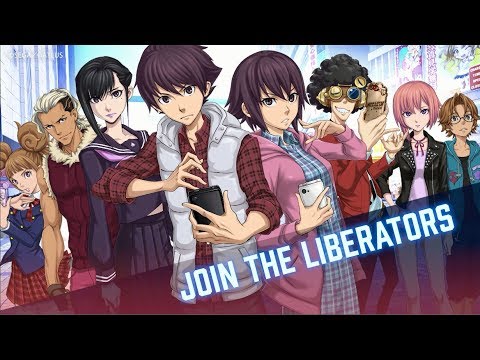 Take on the role of a Devil Downloader, also known as Dx2s.
Dx2s are able to summon and command demons using a special smartphone app.

Led by a mysterious man, you gain this power yourself and become a member of the Liberators. As part of this secret organization that fights to protect the world, you find yourself caught up in a battle between opposing factions of Dx2s.

The enemy is known only as the Acolytes.
Driven by their own ideology, they are one of the other Dx2 factions. Secretly they are eliminating people with high empathy quotients (EP) who pose a threat to their goals.

Pick up your smartphones and join us in the quest to protect the world from the evil Acolytes.

Classic gameplay!
-Use Fusion and Summons to obtain new and powerful demons.
-Press Turn battle system.
-Collect demons, customize your Party and use different tactics to defeat your opponents.

Massive amounts of demons to collect!
-Collect more than 160 different demons from the original series.
-High quality 3D graphics bring classic demons to life like never before!
-Each demon has its own Skills. Strengthen and Transfer them to defeat powerful enemies.

Gameplay systems optimized for mobile
-Enhance, Evolve and Awaken different Archetypes to further strengthen your demons.
-Help out fellow Dx2s in their fight with the Battle Assist feature.
-Auto Battle and Fast Forward functions make it even easier to battle on the go!

Feature-packed for hours of fun!
-Deep JRPG storytelling. Explore modern Tokyo, including places such as Akihabara, Shinjuku and Kudanshita.
-Investigate the Aura Gate to find valuable materials.
-Participate in seasonal events for rewards and materials to make your Party even stronger.
-Face off against other Player’s demons in “Dx2 Battle” PVP mode.