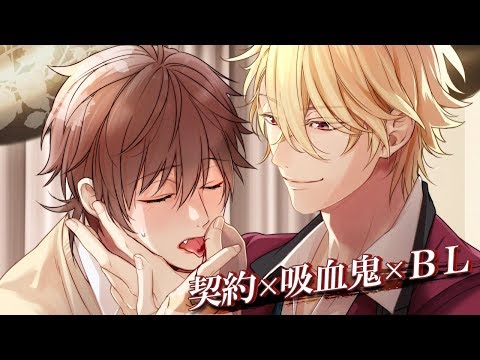 ◆Storyline◆
The controlling "Dom" and the dependent "Sub"--these are "the second genders" of the vampires.
When vampires of two different second-genders meet, they can establish a "bond contract".

Located in a spacious land in a mountain recess is "Eclair Gymnasium Academy", a school where young vampires experience youth. The academy teaches its students about "bond contract" and requires them to find someone to be their contract partner for a limited amount of time.

With the goal of sealing a "bond contract", blood leads these students to their fated pairs...

◆Characters◆
・"Izayoi", a delinquent who comes from a noble family and acts indifferent toward the idea of forming a contract.
×
・"Uzuki", a vampire of an ordinary lineage

・"Takamine", a broad-minded guy of an ordinary lineage
×
・"Chihaya", a vampire with the attitude of a "queen". He comes from a noble family who highly values pedigree.

◆Game System◆
"Blood Domination" is a visual-novel BL game. Players get to enjoy the scenarios through the usage of Scenario Ticket.

・Play the game for free!
Receive 5 Scenario Tickets every day for FREE!

・Determine the course of the boys' love stories by choosing different options throughout the scenarios.
Deepen the bond that he has with his lover and enjoy beautiful CGs and exclusive scenarios.

・Pompous, sadistic, hot-and-cold, noble--these fascinating character traits and more await you!
Their interactions are at times intense and other times sweet. Enjoy the thrilling ride!

Don't miss the mind-blowing CGs in this game, which takes place in the "Dom/Sub universe" where the nature of the characters' relationships is that of control and dependency.