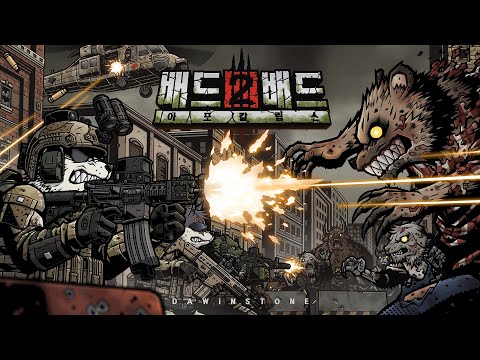 RPG Open World
4.3
BAD 2 BAD: EXTINCTION 物種戰爭：滅絕 4.3 Milicola: The Lord of Soda Milicola: The Lord of Soda 3.4 BAD 2 BAD: DELTA BAD 2 BAD: DELTA 3.6
BAD 2 BAD: Apocalypse is a RPG developed by DAWINSTONE,
'Bad to Bad: Apocalypse' is the official sequel to 'Bad to Bad: Delta' and 'Extinction' and is armed with a wider stage, worldview, and rich content. In Apocalypse, the Delta Team, led by Major Pan, rescues and rebuilds a world that is being destroyed by a human virus. Join the Delta team on an epic journey that begins with survival and rebuilds the world.
◆ Features of the game
+ A vast open world RPG! A bigger worldview!
+ Exploring, collecting, fishing and even crafting for survival!
+ More than 3 times the number of guns and items compared to the previous game
+ Support for more detailed character growth and decoration
+ More than 60 maps to explore and various locations!
+ “World Mission” to perform missions around the world
+ Organize and train your own special forces
+ Artillery support, air support and even powerful drones!
+ “Battle Armor” that you can control and fight
+ More advanced graphics and upgraded system

■ Survival and Rebuild
Rebuild the world by defeating powerful hostile forces and virus-infected Wilders by upgrading your base camp and crafting the necessary equipment with the core content required to survive, including exploration, collecting, fishing and crafting.

■ Upgraded customization
From gun remodeling to character customization, more detailed customization is now possible. From helmets, which were lacking in the previous work, to night vision goggles, and various accessories, you can try them out.

■ Form your own special forces
In Apocalypse, the character development and squad system that is stronger than the previous work, the tactic change for each situation and the items equipped by the crew became more important. BAD 2 BAD: Apocalypse 物種戰爭：末日啟示 will be installed on your device. DAWINSTONE
Download via QooApp