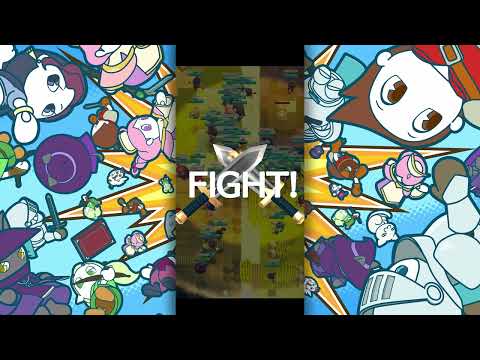 ■ In GGGGG...
- The basic controls are just move, attack, and special move in this simple-to-control action game!
- Compete with up to 99 other players in 100-Player Battle Royale!
- Cooperative play brings the heat! Join a team of up to 4 players to duke it out in Battle Royale! You can also take on the Dungeon Run!

Compete with other players for trophies, or tackle dungeons at your own pace, leveling up your character and equipment as you go. Have a blast with your friends doing whatever you want. Vicious monsters and other players from around the world are waiting for you!

■ Basic Controls
Swipe to move, tap to attack, and tap-and-hold to perform a special move.
Anyone can jump right into the action with these simple controls!

■ A Variety of Battle Modes
- 100-Player Battle Royale (Solo/Duo/Squad)
A PvP battle with up to 100 players where you fight to be the final survivor.
Destroy blocks and collect power up items to defeat your opponents and be the last one standing.

- Battle Royale (Solo/Duo/Squad)
Eight-player PvP battles.
Play to the strengths of your class and work together with your allies to triumph inside the confines of the playing field.

- Dungeon Run (Solo/Squad)
Play alone or team up with other players in this PvE mode.
Defeat monsters and protect the princess as you make your way deeper into the dungeon and battle powerful bosses.
Conquer Dungeon Runs to upgrade your weapon to the max!

Even more content is planned to be added over time!

■ Distinctive Character Classes
Fighter: A good balance of attack power and HP.
Knight: High HP and capable of defending themselves and others against enemy attacks.
Priest: Acts as support by healing themselves and others.
Wizard: Boasts extremely high attack power and can strike a wide area.
Archer: Excels at attacking from a distance.
Thief: Runs circles around the enemy at high speed, all while stealing items.

Even more content is planned to be added over time!

■ A Range of Skins to Transform Your Appearance
Heroes, hunters, national costumes, turtles, and more...
The combinations are endless!
Use your favorite skins to stand out on the battlefield!

■ Aim for the Top Spot in the World Rankings!
Secure trophies in Battle Royale to earn your place as #1 in the world!