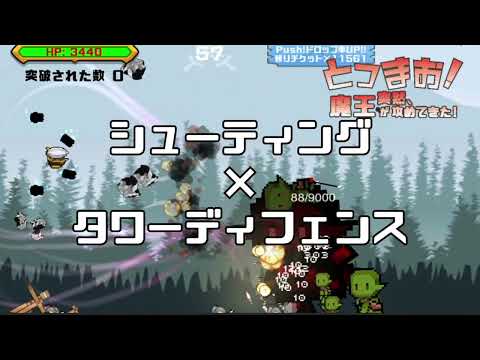 Action Casual STG Tower Defense
2.9
Raid! Suddenly the Demon Lord attacked is an action game developed by GomaApp.
This game is available in Japanese only.
A new action game that combines "shooting" and "tower defense" elements.
You are a hero.
A demon lord suddenly invades a certain kingdom.
Repel the attacking demon king army with the hero power and the warriors.

Equip a lot of weapons that move in various ways and defeat the attacking monsters!

Fight enemies from both the sky and the ground with your warriors!

How to play
・Free Gacha! Play lots of gachas and get weapons!
・Use the Fever Tickets you get in-game to defeat enemies in time and get a lot of items!
- "Attach" various weapons to the hero to repel the demon army attacking from the demon world. Swords, staves, bows, ballistas, trebuchet, and more!
Developer's contact
Email
gomaappgames@gmail.com
Privacy policy
https://gomaapp.github.io/Privacy-Policy-Japanese-/ Raid! Suddenly the Demon Lord attacked 等待突擊！突然，魔王出擊了！ will be installed on your device. GomaApp
Download via QooApp