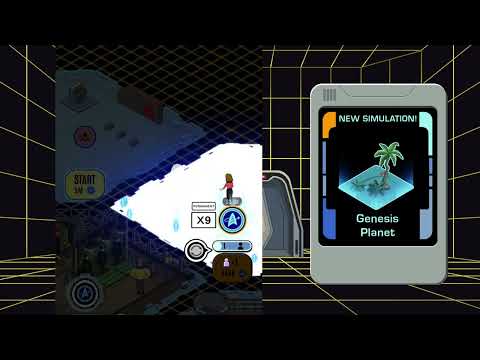 Finally, after yet another tedious duty roster, the Lower Decks crew of the U.S.S. Cerritos is ready to party at a Zebulon Sisters concert! Tendi's even more excited, as this'll be her first Chu Chu Dance! But first, they need to get through routine training exercises on the holodeck, which Boimler has been entrusted to organize. Boimler? With power? When has that ever been good?

Impatient to get to the dance, the crew try to end the simulation only to find the Cerritos’ computer has been hijacked by rogue AI Badgey. He’s locked them in the holodeck and deactivated all safety protocols – so now Boimler, Tendi, Rutherford and Mariner must work through Star Trek stories, both familiar and new, so they can return to the real world. But be careful – if they don’t succeed, they’ll die for real. And even worse: they’ll miss the party!


THE ENTIRE STAR TREK UNIVERSE IN YOUR HANDS

Star Trek Lower Decks Mobile gives you the chance to tap through classic Star Trek stories in the humorous style of Lower Decks. Enjoy your favorite storylines with a fresh funny twist – and maybe even give them new endings!

Every holodeck simulation will see the Cerritos crew facing off with a big bad boss, who must be defeated to get to the exit. Level up your crew with training exercises and mini-games in Science, Engineering, Security and Command!

It’s not just the Lower Decks crew of the Cerritos here to play – Badgey has a whole array of characters from the Star Trek universe for you to collect and trade! Complete regular events to unlock special characters to bolster your crew!

With mini-events landing twice a week and a main event each weekend, there’s always new simulations for you to explore! And you won’t miss out even if you’re busy – you can automate your crew to train while you’re away! Star Trek Lower Decks Mobile 星際爭霸戰：底層甲板 Mobile will be installed on your device. East Side Games Studio
Download via QooApp