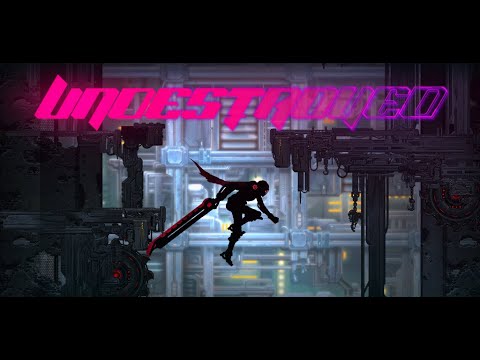 Even the last remaining hope that is the shelter has been detected and attacked.
You as an adventurer with your mechanical body must discover the forgotten technology
and bring the light back to this dark world.

Undestroyed takes place in a futuristic cyberpunk world.
It is a roguelike shadow-scrolling action game in which
you clear one machine cell at a time in a world populated by rampaging robots.

Roguelike Master x Fighting games
Repeated deaths aren’t failures, but are actually the path to becoming stronger.
The new weapons and abilities you obtain every time you die will make battles more exciting.

Craft a Variety of Powerful Weapons
Craft a one-handed or two-handed weapon that feels comfortable in your hands, such as dual blades, spears, machine guns, and more.
Also protect yourself with sub weapons such as drones, grenades, and protective shields.
Equip powerful weapons to cut down your enemies.

Evolved Gameplay
Change the appearance of your character through the special ‘Battle Body’ system, and equip ‘Ability Cards.’
You can create your own unique fighting style by choosing your own equipment.

Survive a Dynamic Mechanical Dungeon
Avoid giant deadly saw blades and other fatal gimmicks while fighting the enemy.
Defeat all the enemies in the dungeon or just rush to the next stage
in order to survive. Undestroyed : Shadow ARPG Undestroyed : 機戰地城 will be installed on your device. Dreamplay Games
Download via QooApp