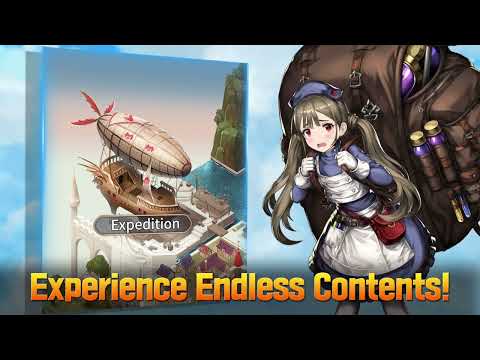 • Explore Enormous Contents
Set yourself for an epic adventure and experience exciting Campaigns, a League War, an Advent, an Expedition, a Guild Raid, the Circus Island of Madness, and others as well!

• Stunning Graphics
Experience detailed monsters, powerful heroes, and visual effects in a majestic fantasy world of myth!
Combat is simple - just match 3 magic gems and blocks of a particular attribute. You can chain together and blast multiple epic combos!

• Hero Collection
Recruit legendary heroes and build your own unique Valiants!
Heroes have their own unique skills and abilities, making teams more effective in battle. Build a team that can crush any enemies!

• Companion System
Let your companion to assist you in battle!
Companions use bonus blocks and battle consumables to have advantages in battles!

• Guild Raids
There's a new boss bounty! The raid is about to begin, so dive into fun match-3 RPG battles with others!
Go on raids to fight incredible beasts and take part in guild wars.

• Arena / PVP duels
Win in the Arena, and get rewarded each time you climb to the next tier!

Brave Nine & Puzzle is a free fantasy game combining epic match 3 duels and hero-collecting – all that topped with PVP duels full of action. Become a hero and start your adventure with the Valiants now!

Brave Nine & Puzzle is free to download and play. However, there are in-app purchases available to expand upon your gameplay experience.
*A network connection is required to play. Brave Nine & Puzzle - Match 3 棕色塵埃拼圖 will be installed on your device. NEOWIZ
Download via QooApp