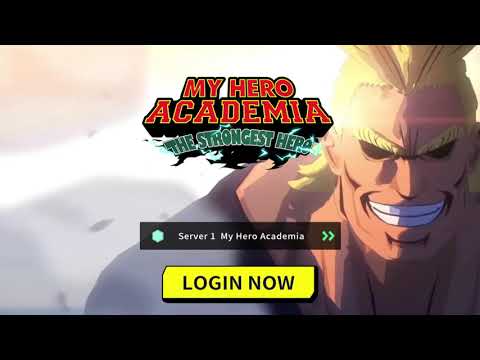 My Hero Academia: The Strongest Hero is a 3D action game based on the famous anime series “My Hero Academia”. The game is available on both Android and iOS platforms with Japanese and English voiced dialogues. This is the South-East Asian version of the game.

In the game, the player will act as a manager at the hero's office. It is their job to scout and trains the heroes. Characters from the original anime such as Midoriya Izuku, Bakugo Katsuki, and Todoroki Shoto will also appear in the game. Even if you get a lower-class hero, you can also upgrade it to an upper-class one after some training!

As for the gameplay, it is more than a simple turn-based RPG. Players will need to control the heroes and fight with strategies based on their quirks including “One For All”, “Explosion”, “Half Cold Half Hot”, “Zero Gravity” and more.

The game has a 3D open-world map. Players can explore the world, encounter side missions, collect easter eggs, and experience the hero’s daily life!

[It is fine now. Why? Because I am here!]
The 3D mobile action game My Hero Academia: The Strongest Hero is launching now!
Most people in this world are born with superpowers called Quirks. As some began using their Quirks for evil, brave souls rose to defend justice.
A profession that had previously only existed in people's minds—Hero—now became a reality.
Izuku Midoriya, a young boy who was born Quirkless, idolized All Might, the Symbol of Peace, and dreamed of becoming a great hero himself.
Will the Quirkless boy be able to defy the odds and realize his dream?
This is the story where he becomes the greatest hero of all!
[Officially Licensed; Stay True to the Anime]
Licensed and overseen by the official "My Hero Academia" team, the new 3D mobile RPG "My Hero Academia: tsh-sea" stays true to the anime. This game will recreate the world just as the anime, and you can enjoy original game storylines! Join the game and be a real hero.
[Use exclusive Quirks to defeat your enemies! Realistic Combat Experience]
Each hero has their own superpowers called Quirks: One For All, Demolisher, Half-Cold Half-Hot, Zero Gravity, and more... When the heroes use their ultimates, players can get a realistic combat experience! Launch magnificent and destructive skills to turn the tide of battle! Smaaash!
[Fair PvP, Free Combo Style]
The "PvP" battle is one of the most important modes of the game. During the PvP battle, the players don't need to worry about the camera movements, but focus on the attack, defense, evasion, and other strategies. Players can also use different characters in the PvP battles, which allows players to combine various quirks to make the ultimate combo!
[Collect Heroes & Re-live the Story]
All the popular heroes from My Hero Academia are here! Collect powerful heroes and train your roster of characters to become the No.1 strongest hero! An animated world true to the original works! Join and create your future in this brand-new story!
[Vast Open 3D World, Explore a World of Heroes!]
An open 3D world full of cities and wondrous sights! Use walls to move at great speed and travel the world. Plenty of various settings and quest lines! Experience the daily life of a hero!
The only limit is yourself!
True to the original My Hero Academia works, The Strongest Hero is here!
PLUS ULTRA!
Join now and become the strongest hero!
--------------------------------------------------------------------
※The story contains sexual & violent content and isn't suitable for children under the age of 12.
※The game is free-to-play but contains in-app purchases (virtual currencies, items, etc.).
※Kindly keep an eye on your game time and keep it at a healthy level. My Hero Academia: The Strongest Hero 我的英雄學院：最強英雄 | 東南亞版 will be installed on your device. Bluetaku Pte. Ltd.
Download via QooApp