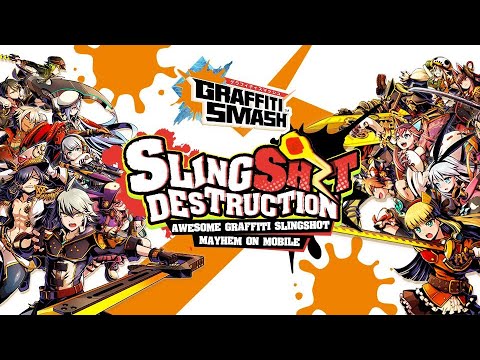 Graffiti Smash is a pinball/ slingshot game developed by Boltrend Games.
Graffiti Smash -- a new hit presented by BANDAI NAMCO Entertainment Online!
Slingshot to paint surfaces and get power boosts. Enjoy PvP matches via a real-time online battle system. Co-op with friends to clear dungeons and beat bosses. Enjoy a script of 1 million plus words that tells stories about the bonds and dynamics between people in a post-apocalyptic world!

In this dystopian alternate reality, the human race is fighting for survival against the invasion of a mysterious entity known only as "Arc". The surviving humans have been forced to take refuge in their last sanctuary -- the fortress city of Babel. After generations of propagation, the Arcs have radically altered the ecosystem on a global scale, reducing most of the planet to nothing more than monster-infested wilderness. Eventually, "Arc-resistant" individuals started to emerge. Known as "Hunters". these brave souls began venturing outside of Babel in squads, hoping to reclaim some of humanity's lost territories and restore the long-forgotten glory of human civilization.

■ Intense Field-painting Combat
Hold down, pull back and release! That's all it takes to launch a hunter on a graffiti rampage, leaving a trail of paint across the screen! The constantly changing paint gauge will affect how a fight plays out, adjust your strategy accordingly!

■ Summon Graffiti Beasts
After a Graffiti pattern has been completely revealed by painting the battlefield, a Graffiti Beast can be summoned. Utilize its overwhelming power to turn the tide of battle in an instant!

■ A Wide Variety of Unique Weapon Arts
Weapon Arts are skills that can be activated when your Hunters are armed with weapons! Choose weapons that best suit your playstyle!

■ PvP & Co-op Multiplayer Modes
Have a blast in intense multiplayer modes! Team up with friends to crush mighty enemies or compete against other players to carve out a place for yourself on the leaderboard!

■ Get Loot from Idle Expeditions
Use Expeditions to get loot even when you're offline! Use this handy feature wisely to amass strength-boosting items!

■ Challenge Dungeons with Friends
Acquire new Maps to unlock special dungeons. Challenge these dungeons with your friends to get dungeon-limited special weapons that will give you an advantage against other players!

■ Collect a Wide Variety of Hunters and Weapons
Train your favorite hunters and assemble expedition squads! Permanently increase the strength of your squad by equipping weapons that best suit its composition! Graffiti Smash 塗鴉英雄 | 英文版 will be installed on your device. Boltrend Games
Download via QooApp