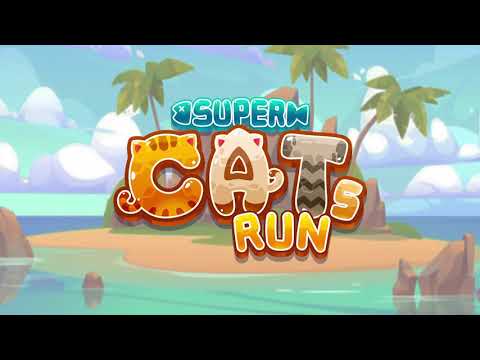 Super Cats Run is an arcade game developed by RET GAMES. In this game, you play as cute cats and run to help your friends in the village while collecting the fish!

---Below is the information provided the developer---
※ Game Features
▶ Avoid obstacles and save your friends!
▶ Play as your favorite cat!
▶ Upgrade your character to strengthen your abilities
▶ Collect cute cats!
※ Run and donate!
▶ We are running a campaign to donate feed to hungry abandoned cats!
▶ Join the organic cat campaign while enjoying the game!
▶ A certain amount of food is automatically collected whenever a cat rescued from the game accumulates.
▶ The collected feed is donated through the organic seedling campaign.
▶ Enjoy the game and donate together!
※ story
The protagonist lives in a peaceful cat village with his friends.
On the hill above the cat village, there was a large reservoir where the protagonist and his friends were raising fish.
Then one day, little dragons came down from the sky and started playing in the reservoir.
We had a great time splashing water and eating fish as much as we wanted.
The main character who was guarding the reservoir got on a boat and approached the dragons to dry them.
“You can't play around here! The village's precious food is gone!"
But the dragons didn't care and played pranks. And then stop, the tree that was blocking the reservoir
The dam burst.
When the dam burst, a huge amount of water flooded the village, and the friends who lived in the cat village were swept away by the current.
I threw it away. The fishes that were being farmed were also... ..
The main character will embark on an adventure to find his friends in order to rebuild the village and the reservoir. Super Cats Run 貓咪跑步趣 will be installed on your device. RET GAMES
Download via QooApp