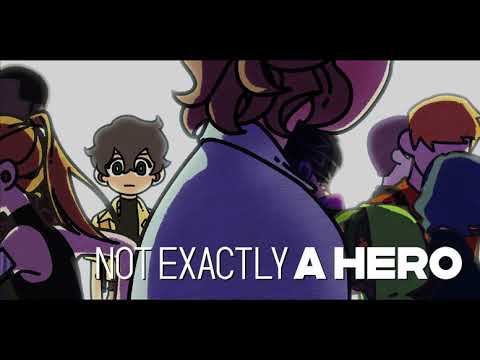 Not Exactly A Hero!

Not Exactly A Hero!

ADV Visual Novel
4.6
Paradise Lost Paradise Lost 4.6 The Ancestral Legacy! The Ancestral Legacy! 4.0 Cat Shelter and Animal Friends Cat Shelter and Animal Friends 4.4
Not Exactly A Hero! is an adventure visual novel developed by Buff Studio (Story Games, Calm Games) for mobile. Sick and tired of your usual typical superhero plots full of clichés? Wonder what it's like to live as an everyday citizen in a superhero universe? Play 'Not Exactly A Hero: Visual Novel, Story-driven Adventure Game' and find out!
🤖"Not Exactly A Hero"
Riley, the game's player character, is a substitute agent with the purpose of supporting a superhero's everyday activities. But essentially, Riley is an everyday citizen. Yes - just like you and me.

🤝"Relationship matters"
In the game, you will go through numerous encounters with all kinds of characters in between cases:
Your boss, Chief, who's constantly under stress from low budget issues;
Your team's new recruit, Chris, who tries to scratch your ego all the time;
An 'Oobur' driver with a knack for stirring up other people's minds;
A kebab truck guy with a weird and wonky personality...
You may befriend some of them. Some might turn their backs on you. It's all up to you and the choices you make.

💬"Every playthrough is like playing a new game"
As the plot unravels, there will be a LOT of decisions you have to make.
Each and every one of those choices will build up as you proceed, and will ultimately decide the final outcome.
This game is packed with 3 starting points, 4 side character routes, 9 different endings and a bonus route for completionists.
You are the protagonist. Everything is up to your choice.

💯Are you a fan of story-driven games, choice-based games, visual novel games, and/or games where you interact and build connections with other characters? Then you will love this game as well!

📌More things to point out!
- This adventure game is FREE TO PLAY (F2P)!
- This game is a story-driven visual novel where you get to live as an everyday citizen within a superhero universe
- Meet and interact with various characters with different personalities. The characters may look cold and with an attitude on the outside, but are kindhearted on the inside
- Progress through the missions given by your boss and solve unique puzzles in a "time attack" fashion
- This game is a choice-based game - storyline and ending will differ based on the decisions you make
- We still have so much more stories to tell. We will be bringing more visual novels, text-based, story-driven adventure games in the future
- If you like this game, take a look at our other games, '7 Days' and 'Underworld Office'. You won't be disappointed!

👍We recommend this game to...
- Gamers with a passion for visual novel games, adventure games, messenger style games, and/or games where you actively build connections with other characters
- Gamers who love light-themed superhero movies, comics, etc., or novels
- Someone who doesn't think their life is special - this game will give you the feels
- Gamers looking for Free to Play (F2P) games, indie games, heartwarming and wholesome games
- Someone who likes Marvel films and novel-based games
- Best game for people who find your same old usual copy-paste story-driven games boring
- Gamers who are looking for OG indie games such as Undertale Not Exactly A Hero! 不完全是一位英雄! will be installed on your device. Buff Studio (Story Games, Calm Games)
Download via QooApp