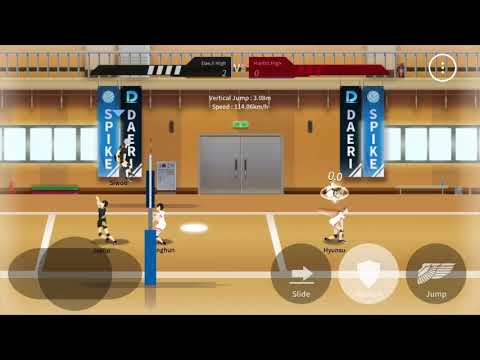 The Spike - Volleyball Story is a sports genre mobile game developed by DAERISOFT. As the title of the game implies, the game is a volleyball-based competitive experience. It is also a remastered version of the previous game "The Spike" released in 2019.

The game seems easy to play at a glimpse since there are few buttons to click with the fingertips. It may be true if the Auto mode and the Beginner mode are on. Although they both help a lot when you first play the game, they also limit the players' freedom to move around, which removes the possibility of making strategic plays. It will be somewhat arduous to control turning them off, but once you get the knack you'll find it very satisfying.

There are story and tournament modes to play. The story mode is a good start for beginners as it progresses from an easier matchup to a more advanced one later, and that gives you enough room to get familiar with the control and the game mechanism.

One interesting factor that pitches in is the raising system similar to an RPG. You will get coins by winning the matches, and they can be used to upgrade the players on different stats like power, speed, defense, etc. up to a certain number depending on the quality of the players.

The Spike - Volleyball Story is an entertaining sports game combining realistic sounds and enjoyable gameplay made by a group of high school developers. It shows the potential and makes people anticipate how they will further improve the game in the future.

The Spike is a sport game developed by DAERISOFT for mobile.
The Spike returns with a new design.
Play the new remastered version now!
You’ll be surprised.

(Warning) The game may be somewhat difficult.
A little practice and you'll get the hang of it in no time.

■ A game where the developers kept communicating with players!
- This game was able to make a comeback, thanks to the support of so many!

■ Let your stress melt away with the beautiful sound of a spike!
- No more stress from school and work!

■ The hyperactive sounds will make it feel like a workout!
- The sounds of shoes screeching on the floor give the feel of intense exercise!

■ A game that showcases the future of indie games in Korea!
- This is how advanced high school students are!

Created by volleyball lovers, “The Spike: Remastered”
Create your player and progress through the story!
In volleyball, the middle hitter may be quite important, but the skills of the setter are what dominate the game!

Your precious ratings and reviews greatly encourage the developers :) The Spike - Volleyball Story 排球高手：重製 will be installed on your device. DAERISOFT
Download via QooApp