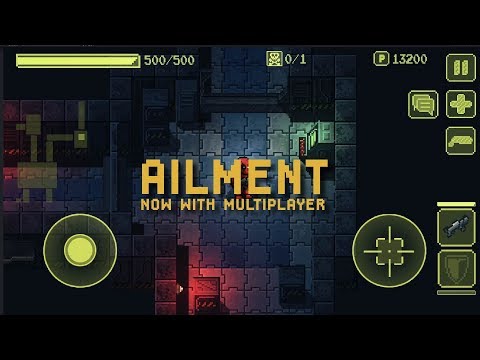 RPG ADV Action Indie Game Pixel Sci-fi 2D
3.6
Endurance - space action Endurance - space action 4.6
Ailment is a pixel style RPG developed by Ivan Panasenko. If you’re looking for a storydriven or dungeon crawler style 2D action game with lots of weapon, hordes of enemies, super intense game-play with horror ambience, pixel art graphics, sci-fi movie references and all that in space, then Ailment is the perfect choice for you.
Ailment got some great nominations and awards and also became one of the Best Indie Games of 2019 on Google Play Store with over 500 000+ downloads.

All this comes with horror ambience and sci-fi movie references specially made for all sci fi aficionados!

Dive into dramatic surroundings and get those inspiring old-school vibes from our exquisite pixel-art space shooter. Defend your NPC friends, explore dark levels, destroy scary bosses and enjoy one of the most action-filled & adrenaline-pumping space shooters of 2019. Finish solo play campaign and master your skills playing PVP Multiplayer with your friends or players around the world

STORY
In-game story takes place on a spaceship in a far-far galaxy. The main character wakes up in a med bay after being unconscious for three days and he sees that all of his crew became enemies. The last thing he remembers is returning from another spaceship where he had a rescue mission. But he arrived everyone on that ship was already dead... He has to remember what happened to him and sort out this mystery.
With amazing dark surrounding, and well-thought and versatile enemies, believe us - it’s going to be pretty hard-core and addictive! Especially since there are brutal bosses that can destroy you quickly which adds amazing competitiveness making it hard to stop playing.

PVP ONLINE MULTIPLAYER:
Get guns, change characters’ skins and challenge your friends or player all over the world in PVP Multiplayer mode, show them what your worth!

CUSTOMIZABLE CONTROLS:
Not comfy with the controls? Change them as you wish!

OFFLINE SOLO CAMPAIGN
The game works perfectly with no internet connection(totally offline), so you can play anywhere: in a bed, at home, on a plane, in a bus, in metro, in any transport!