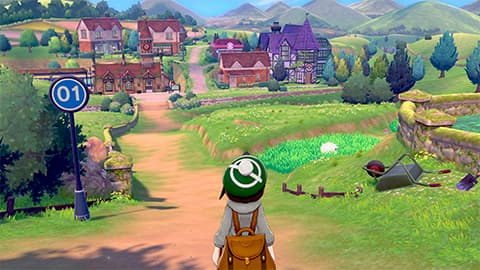 RPG Pokémon NS
Pokémon Sword & Shield is an RPG game developed by GAME FREAK. It is the 8th generation of the Pokémon video game series. In this game, the main character's journey starts in the Galar region, which is designed based on the United Kingdom. The player will also have a chance to get the legendary Pokémon, “Zacian” or "Zamazenta". According to the official, the game will release on November 15, 2019.
Begin your adventure as a Pokémon Trainer by choosing one of three new partner Pokémon: Grookey, Scorbunny, or Sobble. Then embark on a journey in the new Galar region, where you’ll challenge the troublemakers of Team Yell, while unraveling the mystery behind the Legendary Pokémon Zacian and Zamazenta! Explore the Wild Area, a vast expanse of land where the player can freely control the camera. Team up with three other players locally or online in the new multiplayer co-op Max Raid Battles* in which players will face off against gigantic and super-strong Pokémon known as Dynamax Pokémon.
Certain Pokémon can even Gigantamax to gain a new look and a powerful set of G-Max moves. But there’s more to being a champion than honing your battle skills: you can pick your own clothes and get a new hairdo while visiting the stores in town, so you can be the Trainer you want to be. Throughout your journey, you’ll encounter newly discovered Pokémon as well as familiar ones that will look a little different in their new Galarian forms! And for another way to level up your Pokémon, assign them Poké Jobs to complete. You can even play with your
Pokémon in Pokémon Camp, just for fun!
Catch, battle, and trade Pokémon on a new adventure in the Galar region
Choose from three new partner Pokémon and encounter never-before-seen Pokémon
Unravel the mystery behind the Legendary Pokémon Zacian and Zamazenta!
Players can control the camera in the vast Wild Area
Team up with other Trainers to participate in Max Raid Battles*!
Battle wild Dynamax Pokémon in Max Raid Battles* and try catching them!
Pokémon Center Online Information Page:
Sword：https://www.pokemoncenter-online.com/?p_cd=4902370543889
Shield：https://www.pokemoncenter-online.com/?p_cd=4902370543896
Official website: https://www.pokemon.co.jp/ex/sword_shield/