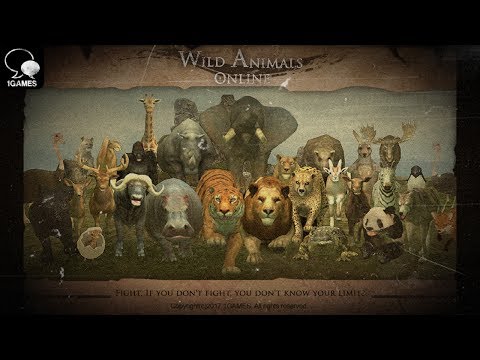 Wild Animals Online is a survival for the fittest game. It is a world of animals whereby the strongest of all animals survives based on the law of the jungle.

Will you be able to survive from the fight against numerous hostile animals, gigantic monsters, and zombie animals?

Step 1: You choose one from the 25 different animals

Step 2: Boost your character to the strongest animal

Step 3: Contend with other players from all over the world – fighting to survive in the wild.

At times, you would need to work together with other animals and participate in a major battle to hunt gigantic dragons and monsters.
Not that you must survive the competition with other wild animals, and escape from animal hunting zombies that are on your trail. Will you be able to survive from the fight against numerous aggressive animals, gigantic monsters, and zombie animals? Wild Animals Online is a fresh multiplayer game for Android platform, and a fun game to play.

1. Various Animal Characters
- From herbivores such as deer, elephants, and giraffes to carnivores including lions, bears, and wolves as well as hippopotamus and boars that are classified as omnivores. You can play more than 25 kinds of various animals on your own.
※ New animals have been added such as penguin, kangaroo, black panther, ostrich and panda

2. Rich maps and different natural environment
- The maps are divided into Sahara, a bleak desert; Siberia, covered by snow and ice; and a savanna (a vast tropical grassland). The natural environments include: Monster Field where huge zombie monsters appear and Dragon Lava where dragons with the properties of fire, ice, and lightning.

3. Gender Choice and Breeding
You can choose the gender of your character and if you achieve love with an animal that has a different gender, you can also have a cute baby animal that can increase your physical strength. But your baby will die if you don’t feed him or her within 24 hours.

4. Diversified Means of Hunting
You can experience diversified battles such as attack, escape, and defense as well as calling the same kind of a power attack, and running to bite off

5. Differentiated Combat/Growth Means
Animals will have different combat and growth means by dividing into food groups and forms of living, depending on the habits and characteristics they have. You must carefully choose the character that suits your preference.

6. Various Missions and Master Menus
You can add more fun to the game through the Trophy Menu where you can make achievements and earn honor points by performing specific missions such as traveling, hunting, and acquiring as well as the Master Menu that enables you to give much more damage when hunting a certain animal.

※ If you delete the game, all the data will be gone and not recovered.

Wild Animals Online is a must play a game for all fun lovers!